“We believe we were the first to have Meyer Sound loudspeakers in Canada, and we’ve benefitted from the consistently high quality of their products in many of our other venues ever since.”

BANFF, ALBERTA: Since opening in 1933, the Banff Centre has rarely cancelled programs or public events. But while the pandemic has forced this renowned Canadian institution to restrict public gatherings and cancel in-person classes, that hasn’t stopped them from upgrading the audio infrastructure with a new surround system from Meyer Sound in the recently renovated Jenny Belzberg Theatre.

Although the venue has yet to be put to use with the new system, opportunely, when restrictions were lifted in mid-2020, a few tours were given. “Before the second wave, a few people saw the renovations and heard the new Meyer system,” explains Kevin Tanner, Managing Director of Productions for the Banff Centre. “So, we were able to start to show it off a bit.”

And there’s a lot to show off…

Previously known as the Eric Harvie Theatre, the venue was renovated substantially. In addition to new Meyer HMS-Series Cinema loudspeakers, the theatre also received a comprehensive upgrade to its audio infrastructure to support the wide range of programming mounted there, and better equip the space for cinema applications. Among the upgrades were the installation of more spacious and comfortable seating, improved lighting, and more flexible and nuanced sound reinforcement for any event or performance. 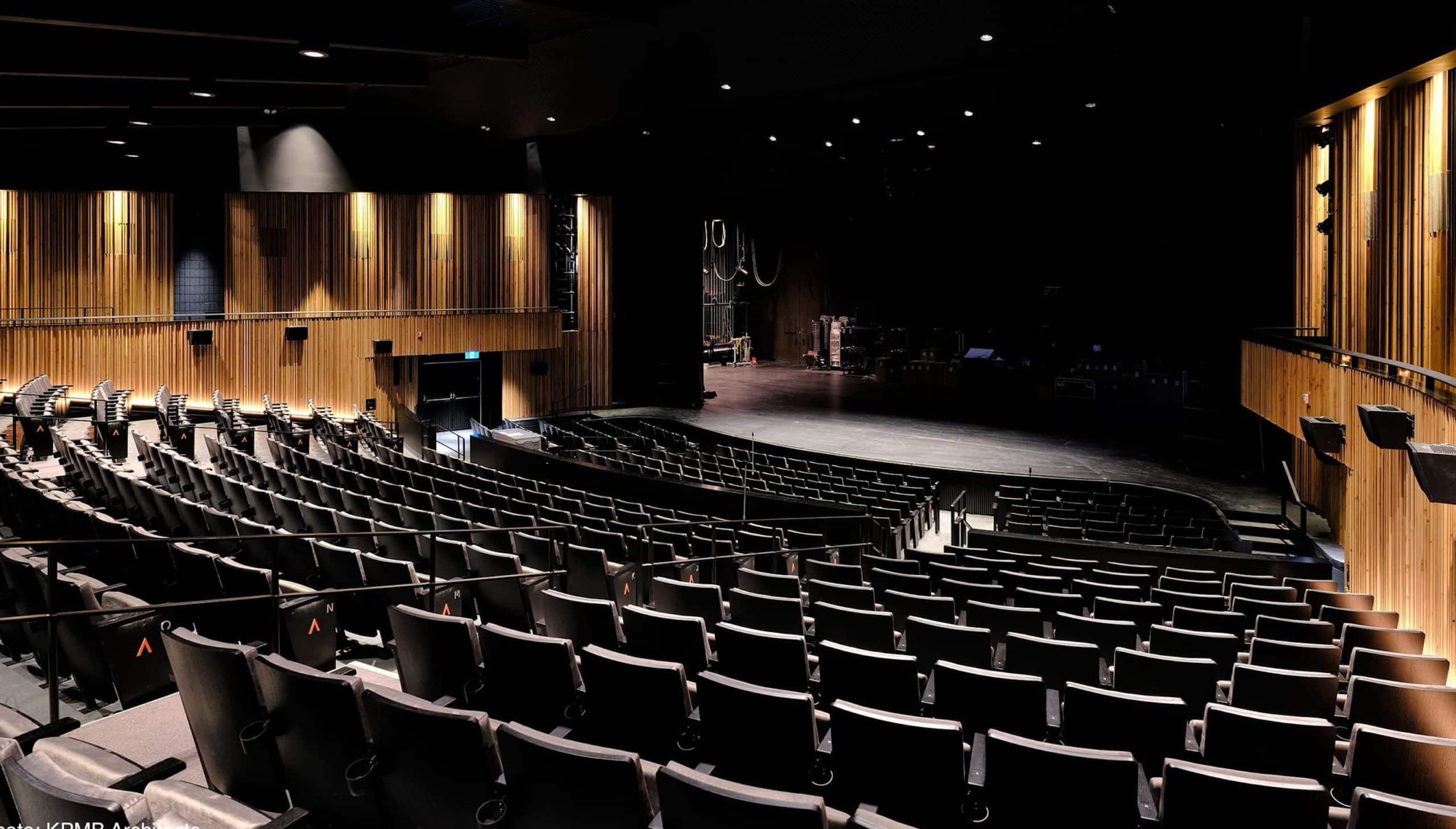 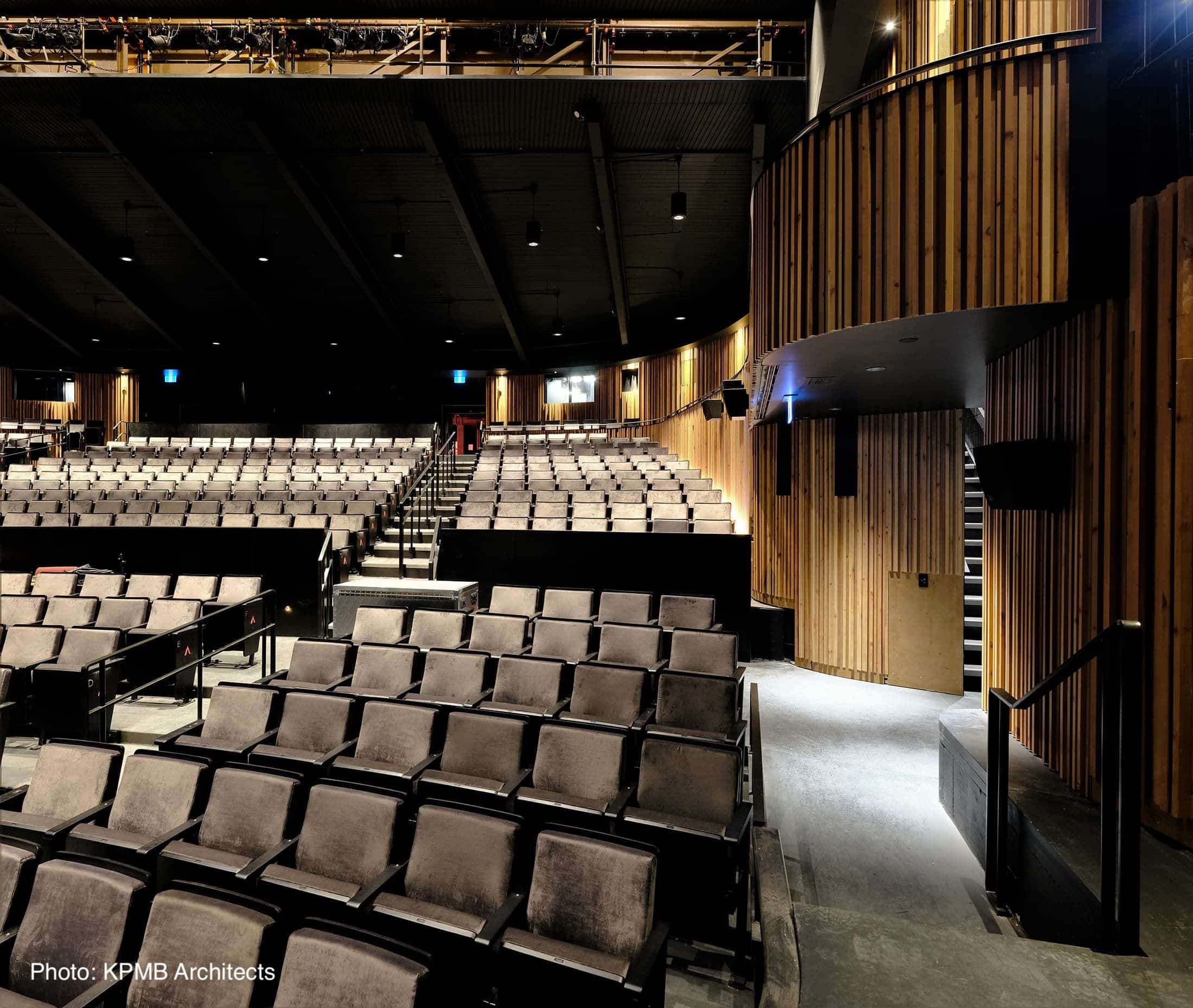 Constructed in 1967, the Eric Harvie Theatre was originally a 940-seat venue. But while it’s a much-loved venue, it’s not known for being the most comfortable space for audiences. With that in mind, the 2019-2020 renovation was intended to dramatically increase physical comfort for audiences, and bring the venue’s production systems into the 21st century.

Beyond increasing the comfort level for audiences and improving access for people with mobility considerations, the theatre’s new seating allows for it to be reconfigured to suit a wider range of events. Additionally, a second level mezzanine/balcony space was also created.

Throughout the project, improving the acoustics and overall sound quality of the theatre was top of mind. Consequently, new walls (constructed of recycled beveled white pine) were created to provide more even sound distribution for acoustic and amplified shows, as well as for cinema applications such as the prestigious annual Mountain Film Festival. Designed in consultation with world-class sound engineer and acoustician, Bob Essert, Charcoal Blue and architects, KPMB Architects, every detail was considered; from aesthetic touches such as perforated metal covers for the Meyer HMS-10s that match the walls, to cutting edge connectivity courtesy of over 62-kilometres of fibre optics installed as the backbone for the theatre’s video, lighting, and audio systems. 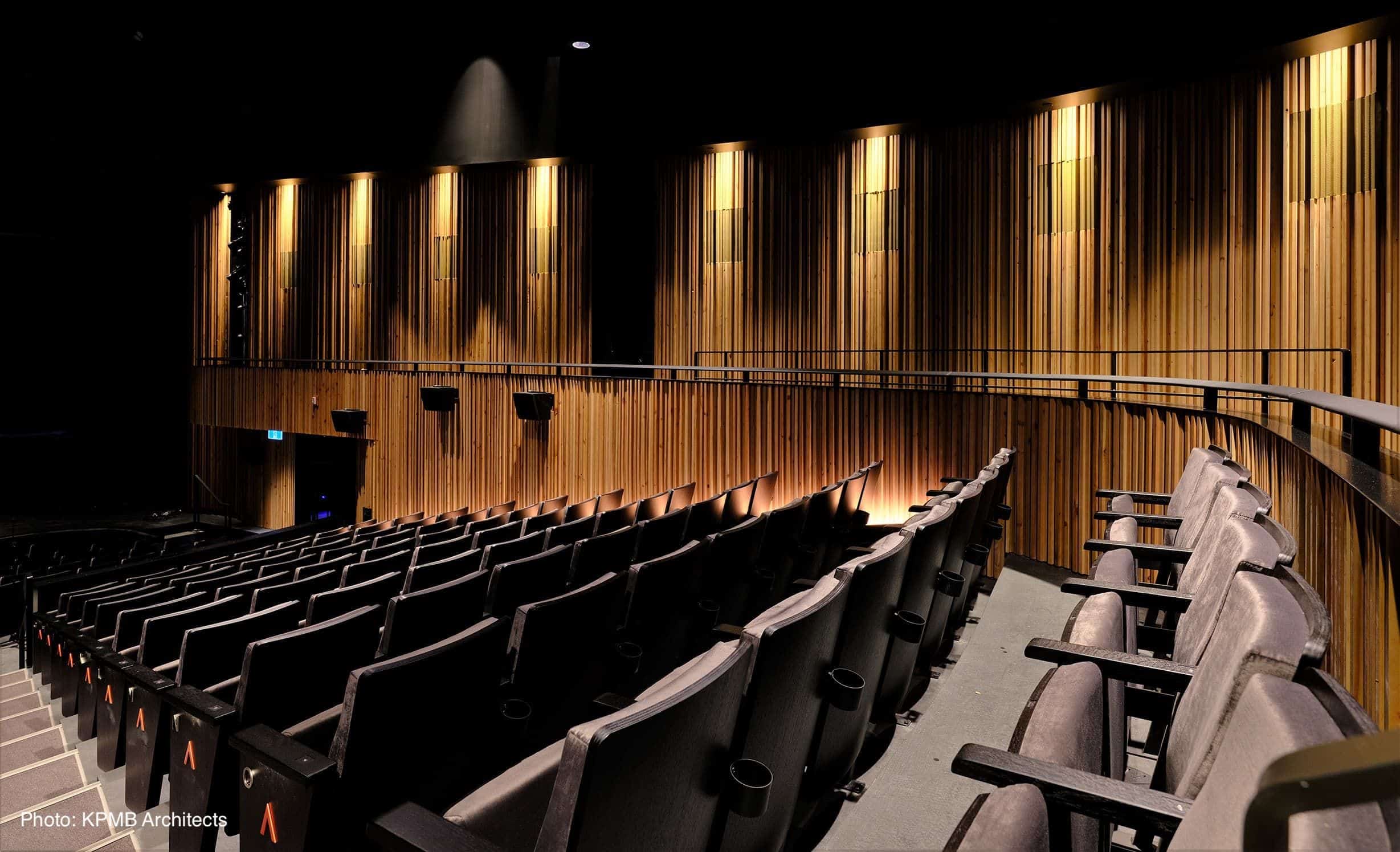 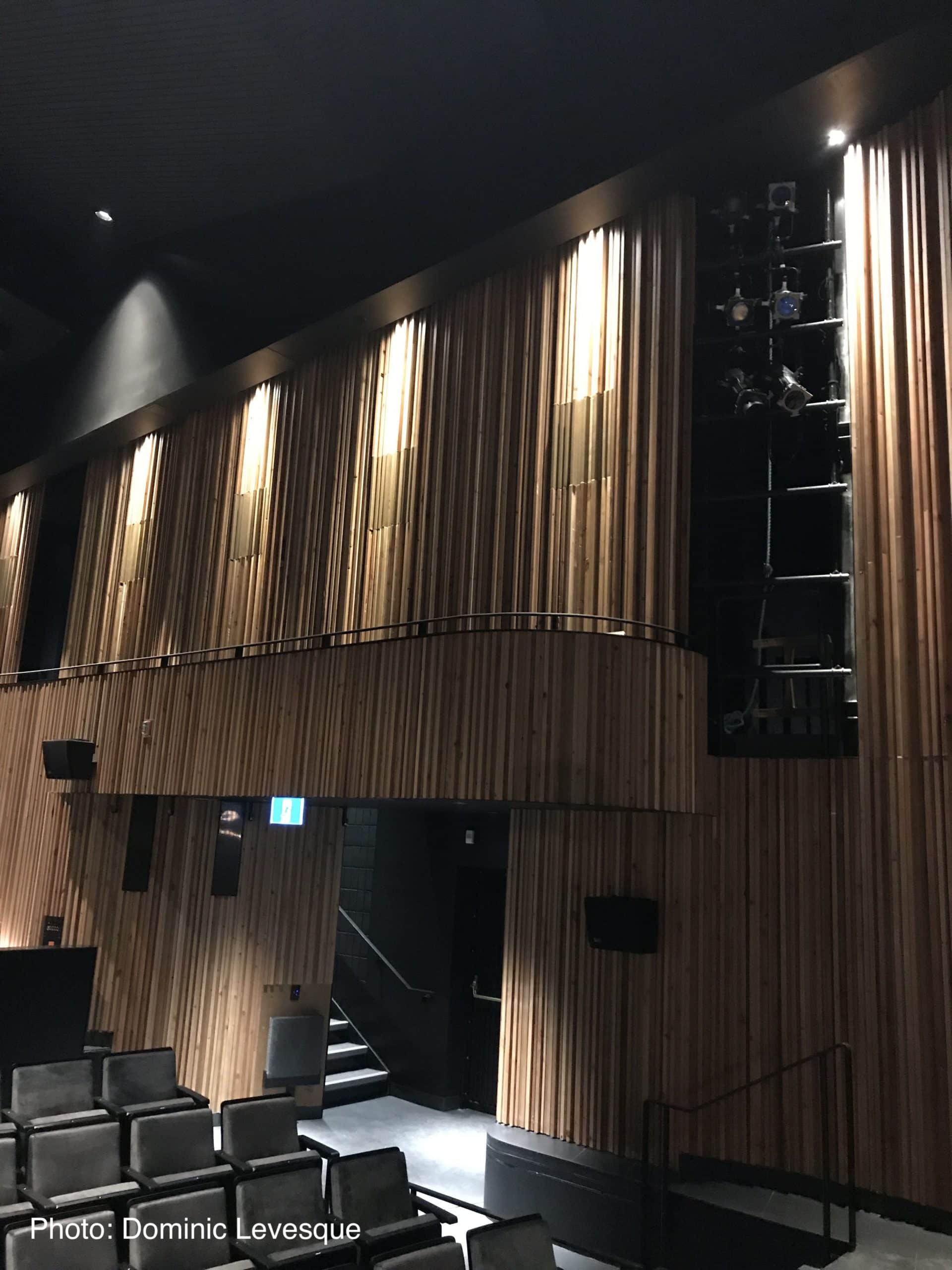 The installation of the audio systems and infrastructure took place over spring and fall 2020, and was undertaken by Aligned Vision Group (AV Group); a Markham, Ontario-based audio, visual, and entertainment technology solutions provider in partnership with the staff at the venue itself. While the surround loudspeakers and cabling infrastructure were completely new, the venue’s previous PA system – a Meyer Sound M’elodie rig, continues to serve as the main PA. “They already owned the M’elodie PA and two Galileo processors,” explains AV Group Partner, Guy Wallace. “We just provided them with the backend to connect the Meyer system and a new, 10 Gig data-capable Network infrastructure.”

Since Tanner started at Banff Centre in 2018, he’s been tasked with overseeing production operations across all of the program areas on campus as well as technical services throughout the campus. “It’s a broad role,” he explains; one intended to respond to the increasingly interdisciplinary nature of the work created at the centre and the need for every venue to be better equipped to handle that.

In total, 22 Meyer Sound HMS-10s and 6 HMS-5s were deployed as surround elements, with placement determined by Charcoal Blue and KPMB. “The HMS-10s are all on the upper wall that wraps around the mezzanine level – two side areas that come up above the main seating level,” Tanner explains. “The HMS-5s are located on the main orchestra level to provide infill where the mezzanine obstructs the acoustic image coming from the HMS-10s. The HMS-10s are meant to carry the room and the HMS-5s fill in the acoustic gap created by the mezzanine.” 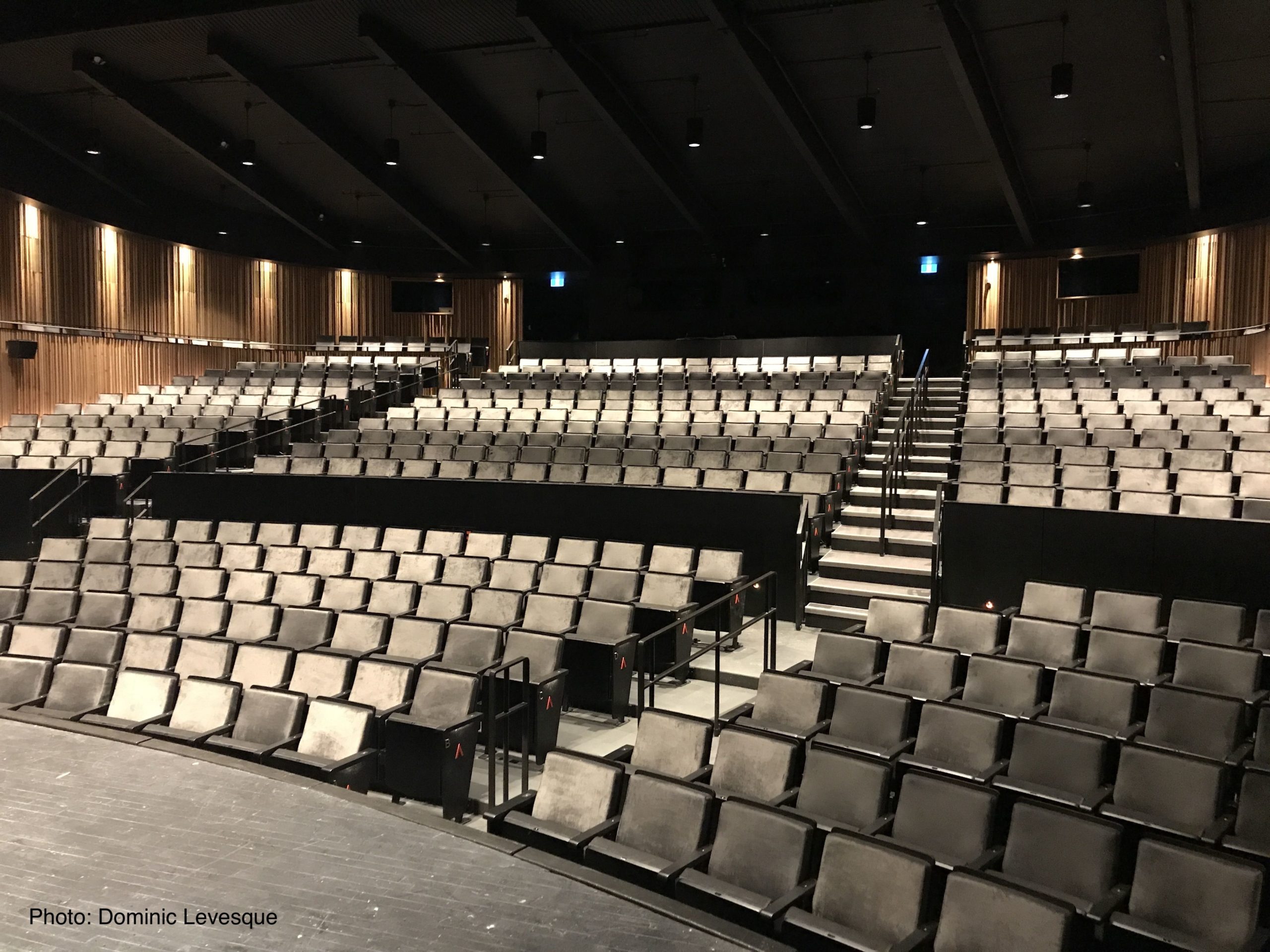 The addition of Meyer Sound HMS-10s and 5s as surround elements, he continues, the system was aimed at increasing the theatre’s effectiveness for film screenings. “We wanted a space that was as versatile as possible, for as many different uses and artistic disciplines as you could imagine,” Tanner notes, adding that the surround system will be used for many different applications, including more traditional, acoustic events such as Opera in the 21st Century. “It’s becoming more commonplace for amplified reinforcement to be used for classical music, even for opera,” he continues. “We may not be doing reinforcement of vocals but when it comes to orchestration, we’re definitely seeing more electronic music being integrated into performances.”

Familiarity was an important decision point for choosing the Meyer Cinema System, Tanner continues: “Banff Centre has had a very long relationship with Meyer Sound and GerrAudio, all across our campus. When we were in initial conversations about the theatre, Bob Snelgrove (Founder/CEO of GerrAudio Distribution) reminded me that GerrAudio sold us their first pair of Meyer Sound UPA-1A speakers in Canada forty years ago. So, we believe we were the first to have Meyer loudspeakers in Canada, and we’ve benefitted from the consistently high quality of their products in many of our venues ever since.”

The venue’s pre-existing Meyer M’elodie system was originally purchased for the Shaw Amphitheatre, Tanner adds. “But it works so well here. So, its primary position is now the Jenny Belzberg Theatre. We trust Meyer’s products. They’re certainly one of the best (loudspeaker manufacturers) and this room needed to provide an enhanced audience experience that was going to be at that same high-level we’ve come to expect from Meyer.”

Futureproofing was also key to the project, as evidenced by the vast amount of ‘behind the scenes’ infrastructure installed by AV Group, Tanner says: “In the preliminary design stages, we talked a lot about whether, in the future, we wanted this to be a room that could support Dolby Atmos or other, spatial audio components. One of our decisions for going with the Meyer was that it would allow us, and continue to allow us, to do that. It doesn’t preclude us from future expansion of the system, and we knew we could trust the quality of audio we’d get from the loudspeakers.”

Ultimately, the decision to go with Meyer Sound loudspeakers best served Banff Centre’s purposes long term. “We’re thankful that we were able to bring in the Meyer Sound platform, and a major element in that decision was the enhancement it would bring to the audience experience. That sealed the deal for us taking this step forward. The audience experience, the enhancement that the Meyer loudspeakers will provide in terms of clarity and quality of sound, is a value add. It’s an acknowledgment of the importance of that quality in terms of the acoustic design of the room and the quality of sound reinforcement we wanted to provide.”

In essence, Tanner says, “This was about bringing the space up to date, as well as being as ready as possible for the future – that was a key design element in how we looked at the overall infrastructure. We knew, even before Covid, that live streaming was going to be very important to the future of the Banff Centre and how we deliver programming. So, we asked ourselves, ‘What can we do to prepare to serve artists of the future and to present artistic practices we haven’t begun to imagine? What is the highest-level, technical infrastructure we can install to be as ready as possible for that and to advance the work Canadian and International artists who come to the Banff Centre to create before they take their work out into the world?’ That was something that was very much on our minds as we were designing this system.”

During your initial consultation, we will assess your needs and develop a customized action plan for your unique project.

Connect With Us
About

Aligned Vision Group is on the cutting edge of complex audio-visual technology solutions for the Immersive, Enterprise, Education, Hospitality, and Sports & Entertainment Venues.